The tenor guitar is a slightly smaller, four-string relative of the steel-string acoustic guitar. The instrument (in its acoustic form) was developed so that players of the four-string tenor banjo could double on the guitar. During the 1920's, 30's and 40's it was popular as a jazz rhythm instrument. In modern times it has become popular with tenor banjo players playing traditional music and song.

The tenor guitar is often neglected in guitar literature but further information can be found on the Internet. One notable site is www.tenorguitar.com which provides a wealth of information and links to other related sites.

I make tenor guitars in two neck sizes in respect of the width.

Wide neck (36mm at the nut) for players used to a string spacing typical of an acoustic 6 string guitar. 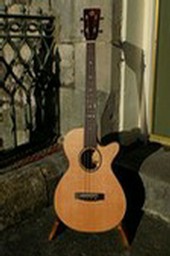 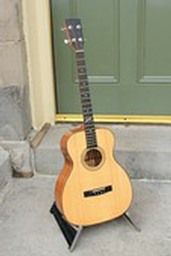 I commonly use a short scale length (540 mm) which provides ease of playing without losing tone and sustain.